“A Past to Cherish and a Future to Fulfill”

The seeds for Saint Paul Presbyterian Church were sown when white missionaries were sent to the South by the Presbyterian Church, U.S.A. in the year of 1865. During this year, the Freedmen’s Board sent Misses Miller and Henderson to Louisburg, NC. Though they were the victims of prejudice, even among their own race, they made a wonderful contribution which paved the way to the heights that are now the pride of Franklin County. They were refused living accommodations at the local hotel, but they rented an old house on the outskirts of the town, and to this log house they walked each day to hold their classes. On Sunday, it was used for Sunday School. After these missionaries, several others followed; namely Misses Gross and Russell. Seeing that there was no Negro church in the community, they influenced the Freedmen’s Board to send a supply pastor to the field. On November 1, 1867, the Reverend Joseph Platt was sent as stated supply, using the same log house for service once a month.

In April 1875, Reverend Calvin Mccurdy came with a view of establishing a church. As there was not a Negro church in this section, the Negro people held membership in the white Methodist Church. From this group a few organized the Saint Paul Presbyterian Church in the little two-room log house in the country. Reverend Calvin Mccurdy and John Williamson were the founders. A piece of land was purchased in the city on South Main Street and on what is now known as West River Road.

On May 1, 1877, Reverend Moses A. Hopkins was sent to the field. Later he was sent as United States Minister to Liberia, where he died shortly after his arrival.  He was followed on April 1,1880 by R. H. Armstrong, who was the first minister to live on the field. His work resulted in a church building being started. He was followed by Reverend F. J. Jordan. On January 28, 1885, Doctor John A. Savage took the field and completed the church building. Reverend Charles E. Tucker came to the field on May 22, 1887. The church burned down in 1901. The Saint Paul members worshipped at Saint Mathias Episcopal Church until the present church was built. Doctor John A. Savage returned to the field in 1889, and the present church which stands as a monument to him was completed July 4, 1917.

In September 1921, Reverend Hampton Theodore McFadden came to Saint Paul Presbyterian Church, being the youngest minister ever sent to the church. Thus began his long and fruitful relationship with Cape Fear Presbytery and Saint Paul. He was installed as minister in 1931, and served until his retirement April 15, 1979, at which time the church honored him with the Pastor Emeritus. He worked diligently with his members to accomplish many improvements which is as follows:

Through the vision and counseling of Dr. H. T. McFadden, Elders James E. Wilson, Sr. and Luther D. Baldwin, and the patience and cooperation of the members, Saint Paul Presbyterian Church was able to launch out on the addition of an Education Building, which now serves as a Day Care Center, along with the educational needs of the church and community. On September 5, 1976 during the 109th Anniversary of the Church, the Hampton T. McFadden Educational Building was dedicated. This day care center was the first in Franklin County to meet the full requirements of the State of North Carolina and the United States Government.  In 2007, through the guidance of its director, Mrs. Patricia Privette, the Center received a Five (5) Star License by the State of North Carolina Department of Health and Human Services Division of Child Development.

Following Reverend McFadden’s retirement, Reverend Charles J. Farmer who had served the congregation from time to time, in the absence of Reverend McFadden, became minister on June 1, 1980, and resigned on August 25, 1985. While Reverend Farmer was pastor, Saint Paul grew in membership, the Educational Building was completed and the mortgage on the building retired. 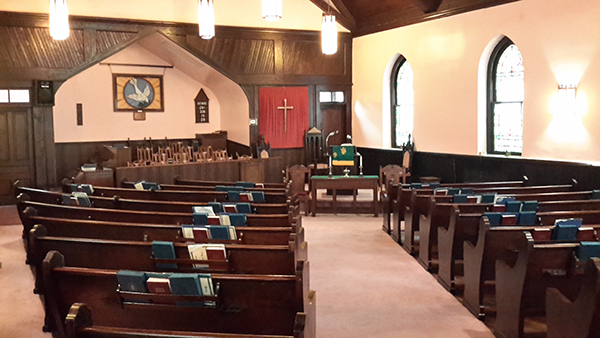 Saint Paul was without a pastor from September 1985 until September 1987. Reverend Larry Vance Edwards came to us as pulpit supply in September 1987, and was ordained in 1988. He was installed as pastor on July 17, 1988.  He resigned as pastor December 31, 1989 to accept a position with the New Hope Presbytery. During his pastorate the church grew in membership and the Christian Education Program was revived.

From January until October 1990, Saint Paul was again without a minister. Reverend Charles J. Farmer returned to serve as moderator and various ministers supplied the pulpit.

The youthful Reverend Jimmie Ray Hawkins was sent from the Presbytery of New Hope as a student supply pastor in October 1990, with Reverend Farmer continuing as moderator. He served diligently until May 1991, when he accepted a pastorate in the Presbytery of the Peaks.

Reverend Larry Bryant Parker, a student at Duke University School of Theology served as student supply, beginning November 1991. Mr. Parker made outstanding contributions towards the nurture and growth of the church; among them were a renewal of the youth organization; through the Evangelism Committee, the institution of a Spring Revival in May 1992, and a Fall and Spring Revival continued as long as he was a part of Saint Paul. Also, through a grant form New Hope Presbytery, a basketball goal with portable goals was established. Saint Paul experienced a variety of inspiring speakers during his pastorate. The church again regained its image in the community through his leadership. L. Bryant Parker accepted a call to be pastorate of a Presbyterian church in Davidson, North Carolina in July 1994.

In September of 1994, Reverend Dr. William C. Harris* was called to serve as interim pastor. Saint Paul experienced a good spiritual advisor through his ministry extending through 1996. Also, in 1996 the conference Room was refurbished.

History was made in 1997. Reverend Ms. Willie Mae Brazil was called as pastor in February 1997, and was installed in April 13, 1997, as the first woman to serve as pastor of St. Paul Presbyterian Church. During Reverend Willie Brazil’s pastorate the various ministries established prior to her coming continued to progress, namely, The Presbyterian Women’s Organization (PWO).

Circle 11-(the younger women of the church)

In 1998-1999, Reverend Brazil initiated Congressional Care Groups and Ministry Teams, a Quarterly Newsletter, and monthly Calendar.  The J. Emanuel Wilson, Sr. Memorial Garden was created at the church through the efforts of Presbyterian Women Circle II. A successful summer enrichment program was held for two summers-2000 and 2001. Reverend Willie M. Brazil served as pastor through October 14, 2001.

Past Clerks of Session are as follows: 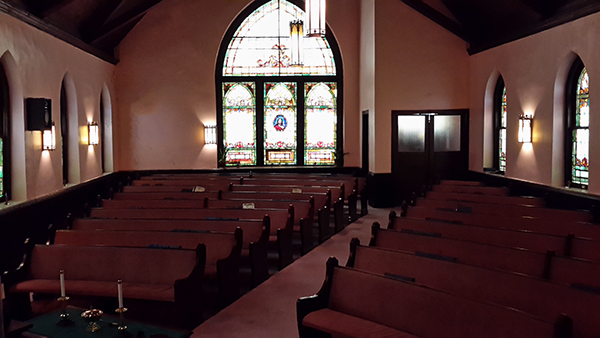 Saint Paul Presbyterian Church has much to be proud of. It has been represented at the General Assembly many times, as far west as Oregon and California. It has also entertained the Synod and Presbytery several times when it was a part of Cape Fear Presbytery. The Presbyterian Women’s Gathering of New Hope Presbytery was hosted by the local Presbyterian Women in the congregation (New Hope Regime). The first woman elder, Mrs. Ida Bell “Hixcy” Hill Thomas* was lay commissioner to the General Assembly, which met in Denver, Colorado in 1962.

Saint Paul Presbyterian Church, Louisburg, N.C., has sent many sons into the ministry: the late Dr. George C. Shaw* of Oxford, N.C.; Dr. John H. Hayswood* of Lumberton, N.C.; Dr. J. C. Alston* of Winston-Salem, N.C.; Rev. C.H.C. White* of High Point and New Bern, N.C.; and Rev. Quitman Evans* and Harman Boone* of California. The church has been blessed with a bequest of Carillon Bells, given to the glory of God and the service of man in memory of the Ephraim Dent Family.

In April 2006, Jerrod Belton Lowry, from Johnson C. Smith, Theological Seminary, Atlanta, G.A., served as student supply. Reverend Jerrod Belton Lowry, was ordained as minister in September 2006, and was installed as pastor of Saint Paul, in conjunction with The Presbytery of New Hope, October 8, 2006.  During his tenure the partnership with A Blessing Inc. was established in 2009 to provide a soup kitchen to the community.  A relationship was also begun that year with Temple Pentecostal Maranatha to share our sanctuary with a Hispanic congregation until they could establish their own. In August of 2010 Reverend Lowry departed to take a position in the state of Utah.

The Reverend Linda Lampkin Parker, Campus Ministry NCCU, returned to us to serve as Moderator September 1, 2010.  During her tenure she helped solidify the soup kitchen and made sure the relationship with Temple Pentecostal Maranatha ran smoothly until they found their own home at the end of 2012. In 2011 she split her duties in the pulpit with Dr. Felecia W. Hardy until her departure on December 28, 2014. 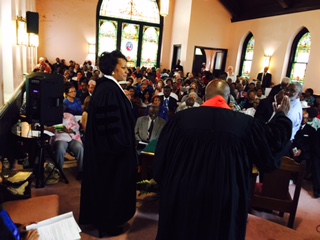 148 years of Saint Paul Presbyterian Church’s existence, gives its members an awesome sense of gratification for a “past to cherish and a future to fulfill.” We have been represented in the General Assembly, and served on Presbytery and Synod Committees representing Saint Paul nationally and internationally. The Men’s Council has supplied members on the Louisburg City Council to many civic and community organizations. We feel that the church must constantly be involved in social issues, community problems and strive to work towards Christian solutions.  Saint Paul feels that its mission must not only meet the spiritual needs of our immediate congregation, but all of society. As baptized people who have been drawn into the life of Christ, we must proclaim good news to all people drawing them into Christ’s life.

Acknowledgement is given to the late Mrs. Lucy Shaw Dent’s article, “Memoirs of Long Ago,” from which facts were taken and updated.